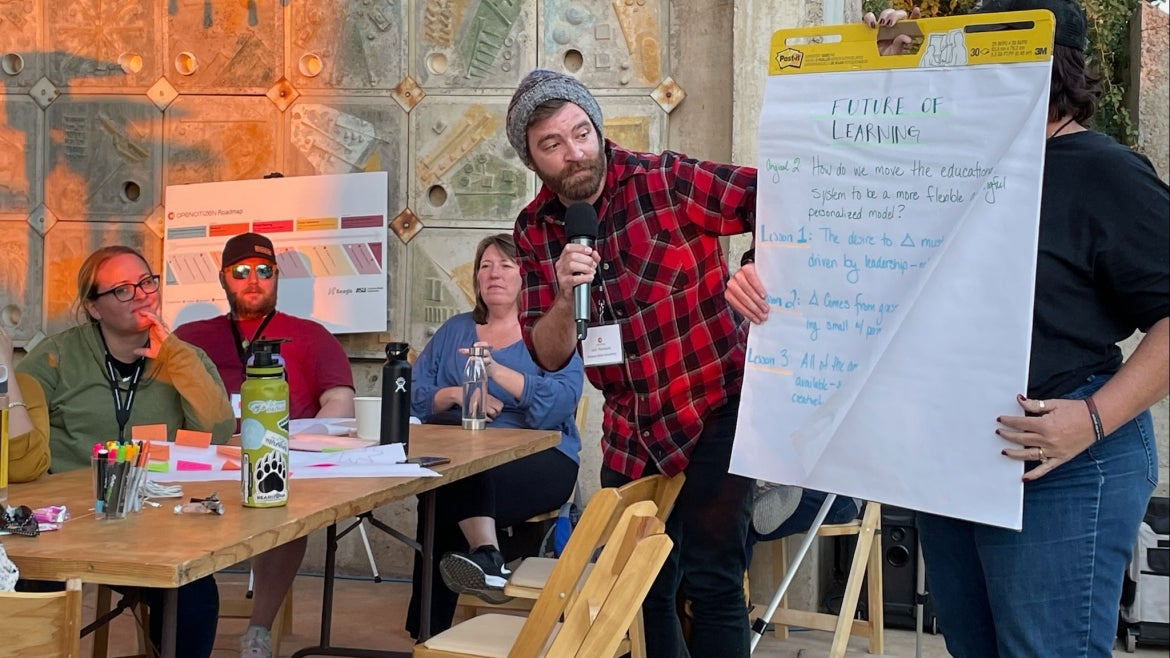 Event provides tools, inspiration to change-makers looking to make a difference in their communities

The first-ever OpenCitizen Gathering, held this month, brought together an exciting group of thinkers and doers to explore a common challenge: how to enable community-based teams to problem-solve in today's complex world.

Over the course of the weekend, OpenCitizen Project — a partnership between the ASU Interplanetary Initiative, ASU Learning Enterprise and Beagle Learning — shared tools meant to inspire participants to make change in their communities, including the five-step OpenCitizen problem-solving process.

“We envision a world of problem-solvers, people supported to identify and take action on the issues in their own communities, and the OpenCitizen Project offers processes and structures that allow any person or group to do just that,” said Lindy Elkins-Tanton, vice president of the ASU Interplanetary Initiative, co-founder of Beagle Learning and principal investigator of NASA’s Psyche mission.

Participants at the Nov. 12–14 event got the chance to practice the OpenCitizen methodology for learning and taking action. To start, they brainstormed big questions that fell under three themes: environment and climate change; the future of learning; and diversity, equity and inclusion.

Organizers distilled their questions into eight ideas that teams then spent the weekend researching and discussing. Participants went between doing individual research and bringing the information back to their groups to discuss what everyone learned and how it could contribute to a solution to their question.

“Everyone here was committed to making and seeing dramatic change in our time in the way people learn, in the way people attack huge thorny problems like climate and equity and diversity, and in how we value each other and value the world we inhabit. The energy alone here actually convinces me that we’re going to be able to do this,” said Christopher Brownell from Fresno Pacific University.

People who take part in the process will eventually be able to earn credit for doing so as long as they achieve certain milestones.

"Everyone has something they want to do — a problem to solve. We think each person deserves to be recognized for the learning they do as they solve their community's real problems. The OpenCitizen Project is helping people solve problems and then offering them college credit for the skills they learn along the way," said Turner Bohlen, co-founder of Beagle Learning. 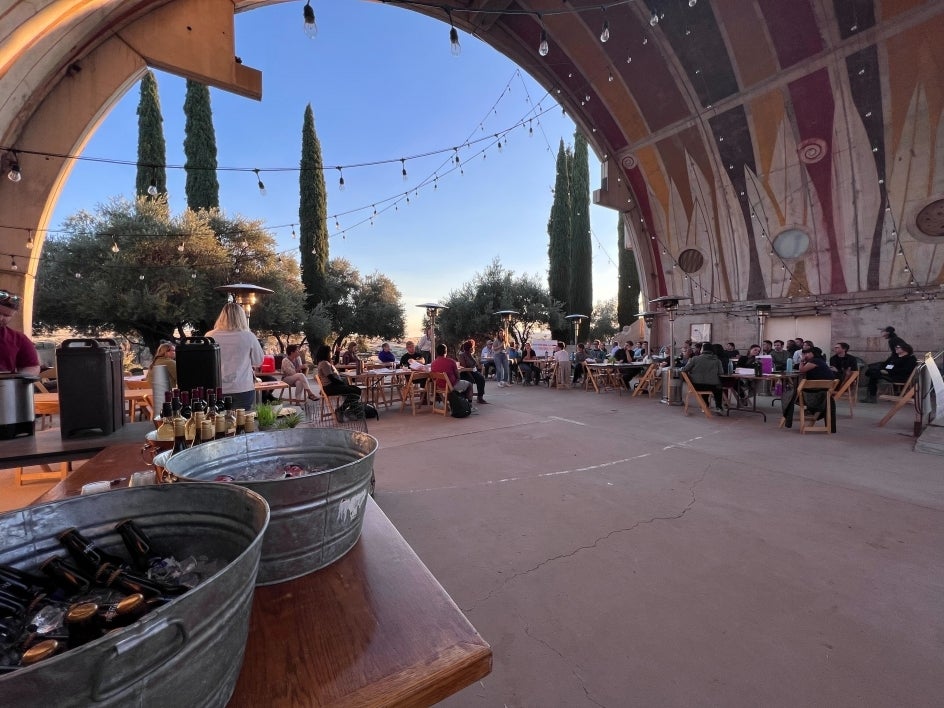 Arcosanti served as the perfect venue for the OpenCitizen Gathering. 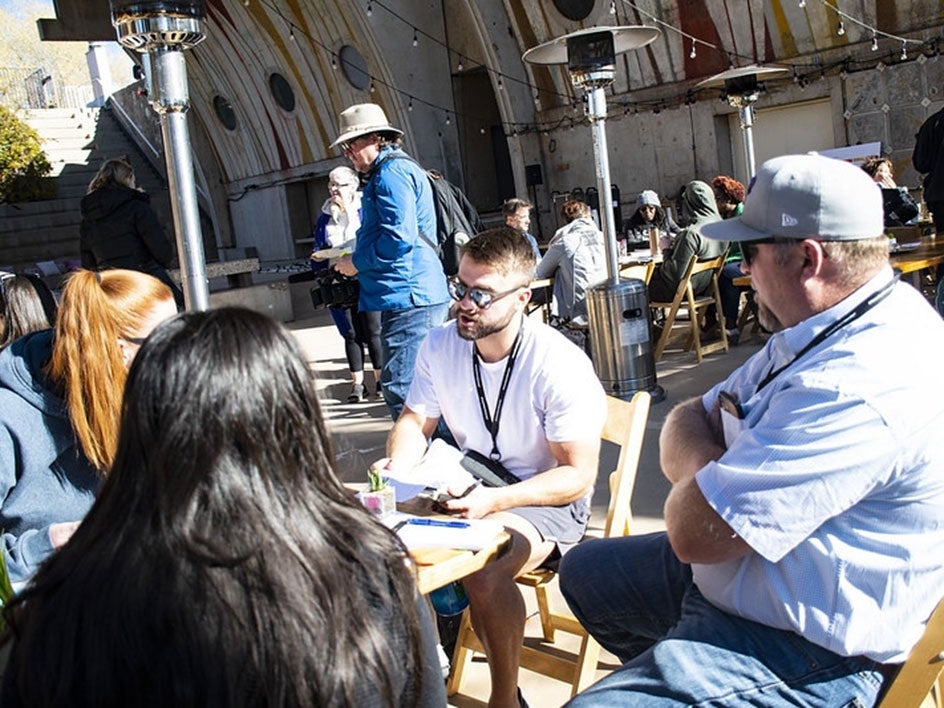 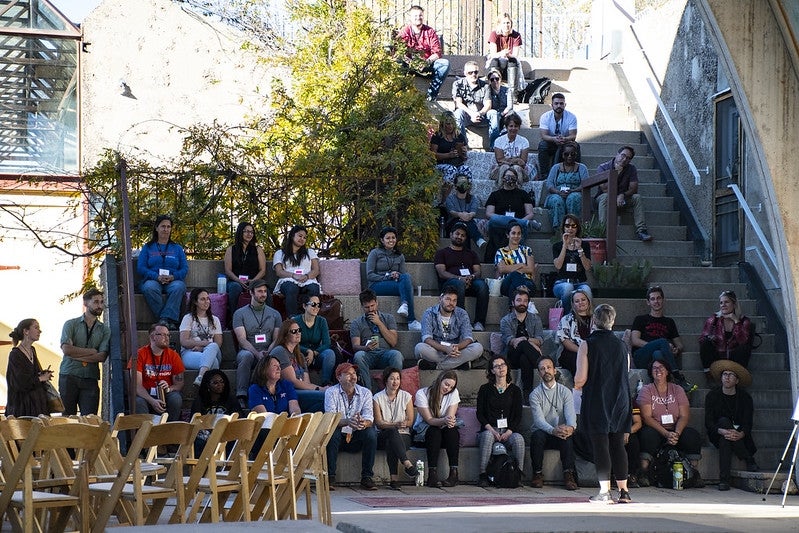 The group listens to opening remarks by Lindy Elkins-Tanton. 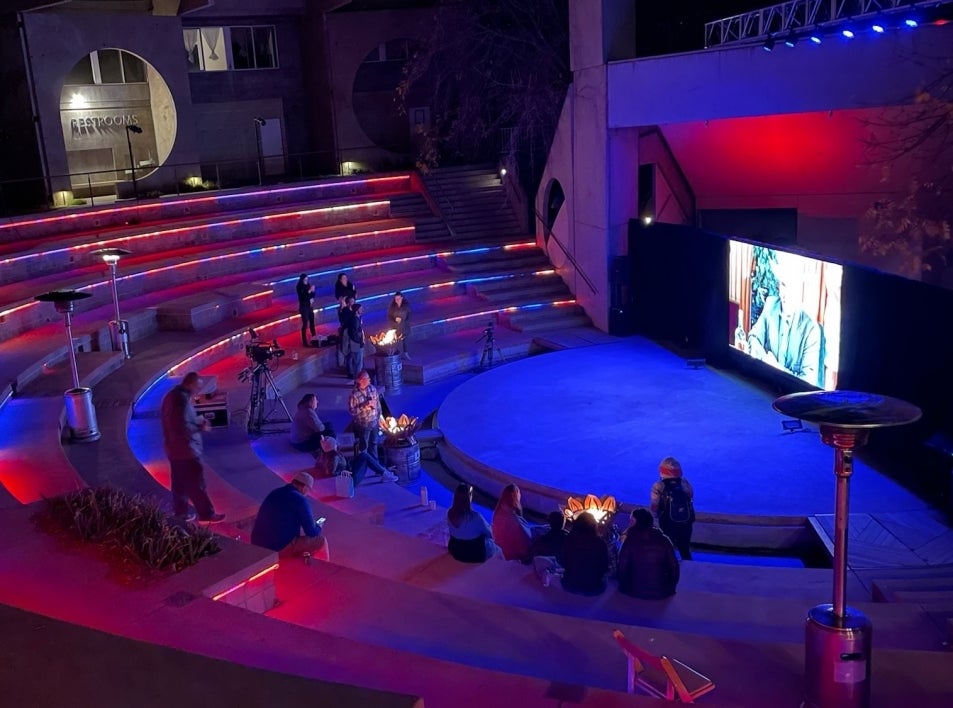 The amphitheater was a unique space used for both presentations and evening relaxation. 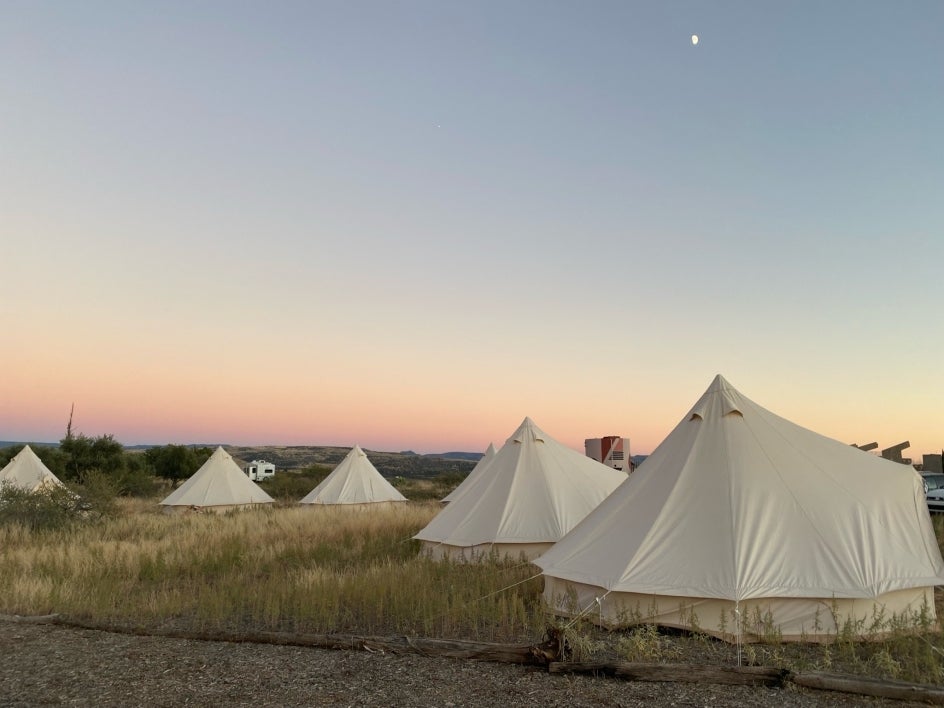 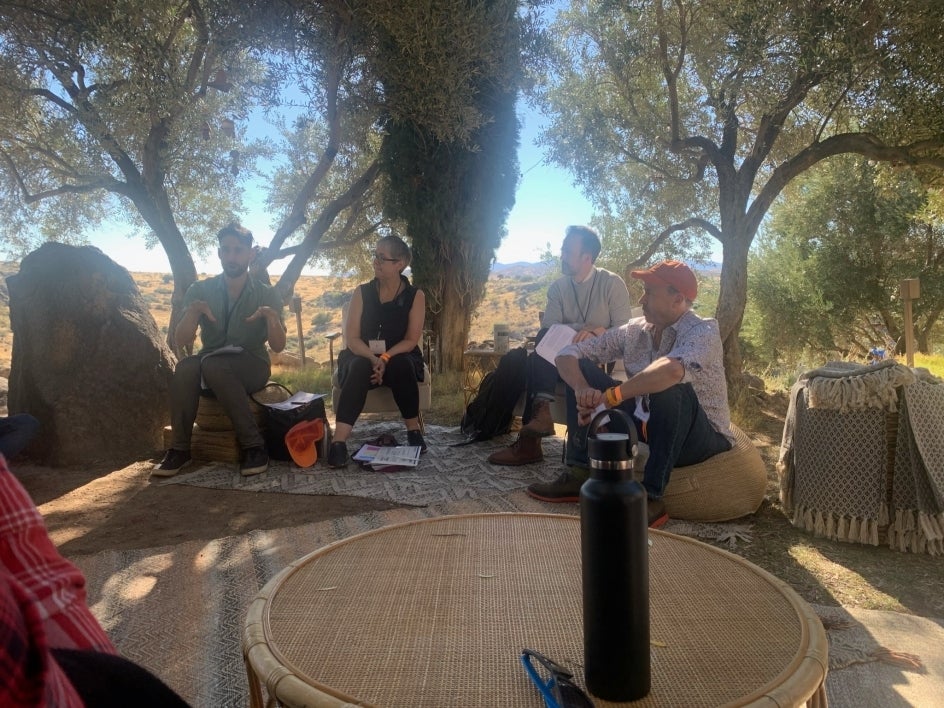 The problem-solving was punctuated with a series of speakers. Thirteen organizers and invited speakers presented on topics like "Cultivating Growth Mindset Through Feedback and Practice" and how to reinvent the hackathon to support community problem-solvers. The presentations served as another opportunity for collaboration, with presenters often asking the group to break up into smaller teams to contemplate the topic of the presentation.

The event took place at Arcosanti, a unique location chosen to give the event a feeling of retreat, reflection and creativity. Cozy, outdoor spaces provided an environment for casual conversations and independent research before participants rejoined their groups. The venue’s amphitheater was an inviting architectural space for engaging talks and interactive presentations. Later in the night, the stage gave way to making s’mores around the firepits. The tents where participants rested at the end of long days of ideation extended community bonding.

For many participants, this was the first time they’ve been able to connect with like-minded people in nearly two years.

"When you sit alone in the midst of the pandemic, you can despair, and you look around and read the news and you see the polarization in society, and then you come and sit with people who are confident that we’re going to get past that, we’re going to make things better. You start to believe it can actually happen again,” said Brownell.

The weekend was an inspiring jumping-off point for action, and that’s what energized participants about making change in the future. The last thing they did on Sunday was form an action plan with realistic steps they could take to accomplish whatever plan they decided to enact.

“I came here saying that I have all these ideas and I don’t know how to implement them and I don’t know where to start, but I’m leaving here with at least a starting block, which is incredible,” said Mary Brooks, a seventh grade English language arts teacher in Knoxville, Tennessee.

OpenCitizen is already planning for the next gathering. If you or your team would value a dedicated time to consider your big goals and learn the latest methods for collaborative problem-solving, reach out to the team at info@opencitizenproject.org.

The American Geophysical Union recently announced the selection of the first cohort of Academy Fellows for its LANDInG Academy to include Arizona State University Associate Professors Lekelia “Kiki” Jenkins of the Consortium for Science, Policy and Outcomes and the School for the Future of Innovation in Society, and Christy Till of ASU’s School of Earth and Space Exploration.The LANDInG (...

Scientific modeling gets a boost

Feeling the pinch from inflation

The American Geophysical Union recently announced the selection of the first cohort of Academy Fellows for its LANDInG Academy to include Arizona State University Associate Professors Lekelia “Kiki” Jenkins of the Consortium for Science, Policy and Outcomes and the School for the Future of Innovation in Society, and Christy Till of ASU’s School of Earth and Space Exploration.

The LANDInG (Leadership Academy and Network for Diversity and Inclusion in the Geosciences) Academy is a two-year professional development program for current and aspiring diversity, equity and inclusion leaders in the earth and space sciences. 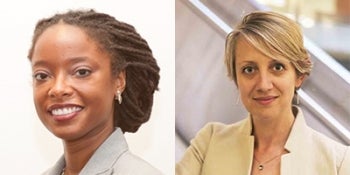 Associate Professor Lekelia “Kiki” Jenkins (left) of ASU’s Consortium for Science, Policy and Outcomes and the School for the Future of Innovation in Society, and Associate Professor Christy Till of ASU’s School of Earth and Space Exploration. Photos by Anthony Harris (left) and Abigail Weibel Download Full Image

Led by the American Geophysical Union, which is the largest professional organization of earth and space scientists, and funded by a National Science Foundation grant, the LANDInG Academy seeks to bring about change by cultivating a network of scientists who are equipped to improve diversity, equity and inclusion at their home institutions and across STEM. The academy will provide fellows with the formal training and hands-on support they need to implement their own diversity, equity and inclusion initiative.

Jenkins’ research centers on the human dimensions of marine sustainability solutions, including fisheries conservation technologies and marine renewable energy. Her work has led to regulatory changes that allow more sustainable fishing practices and has informed international fisheries diplomacy and renewable energy policy. She also studies the science of dance as a means of science engagement, science communication and social change.

“I believe what I will learn in the LANDInG Academy will help me to bring the most current knowledge and best practices to bear in my (diversity, equity and inclusion, or DEI) efforts and leadership roles,” Jenkins said. “With my (DEI) work, I will help programs not only to remove institutional barriers but to also recognize and address the isolation, vulnerability and trauma of underrepresented and minority scientists, especially those with intersecting minoritized identities. I also hope to start shifting the value proposition of this work to expand beyond how it helps science and to center it on valuing the work simply because every human being deserves to be treated equitably and justly.”

Kathleen Vogel, interim director of the School for the Future of Innovation in Society, said, “Professor Jenkins’ selection for the AGU LANDInG Academy, along with her appointment as co-chair of the National Academies of Sciences, Engineering and Medicine’s Ocean Studies Board’s justice, diversity, equity, inclusion and belonging initiative, shows her national recognition in raising (DEI) issues for the U.S. marine sciences and broader academic communities.

“In these roles, she has a critical opportunity to shape the education, training and research focus of students and scholars for the short- and long- term. From her collective work in this space, I see Professor Jenkins as a bridge builder and future thought leader around (DEI) issues to help advise and shape the larger oceans workforce to be more diverse, inclusive and just.”

Till is a geologist who leads a multidisciplinary research program that studies the role of magma in the formation and evolution of planets, known as the EPIC lab. Her research and that of EPIC lab members includes determining the timescales and triggers for eruptions at active volcanoes in the U.S., growing minerals and magma in high-pressure and -temperature laboratory experiments, and studying likely compositions of magma and crusts on exoplanets.

She also has deep interests in working for equity and justice within academic science and improving science communication. Toward these aims, she has served as the Inclusive Community associate director for the School of Earth and Space Exploration (2020–21) and vice chair of the council and member of the Board of the Directors of the American Geophysical Union (2012–14).

"I am incredibly thrilled to have been selected for this diversity, equity and inclusion leadership academy program run by the AGU and supported by the NSF,” Till said. “Not only was it a rigorous and competitive selection process, but there are very few other opportunities to get this type of leadership training, especially with topical training in improving diversity, equity and inclusion in the geosciences from the top social and education scholars who do research in these topics.

"I know I will also benefit tremendously from learning from all the other amazing scholars in the first AGU LANDInG Academy cohort including my ASU colleague Professor Kiki Jenkins, and I look forward to working with them all."

Meenakshi Wadhwa, School of Earth and Space Exploration director, said, “We are thrilled that Professor Christy Till’s commitment to promoting diversity, equity and inclusion is being recognized by her selection as a fellow of the AGU LANDInG Academy. Last year, Professor Till’s efforts and leadership were instrumental in developing a (DEI) strategic plan for our school. Her work as an academy fellow will ensure that she is among the visionary leaders in her field helping to make the earth and space sciences more equitable and inclusive, at ASU and beyond.”

Out of more than 80 applicants, 12 fellows were selected for the first cohort of the AGU LANDInG Academy. The selection process focused on mid-career professionals in positions to effect change at U.S.-based academic, academic-adjacent and research institutions. Future cohorts will be open to geoscientists at different career stages, from other sectors and from around the world.

“Earth and space science remains one of the least diverse fields in STEM,” said the American Geophysical Union leadership team in a recent announcement. “Until diversity is a fundamental feature of scientific excellence, the lack of an equitable, inclusive geoscience community will continue to hamper innovation and discovery. To correct the culture, systematic changes need to come from the community and the institutions that employ earth and space scientists.”

AGU LANDInG will host a plenary session to discuss the programs at the American Geophysical Union fall meeting 2021, which will run in-person in New Orleans and online from Dec. 13–17. The meeting will feature plenaries and speakers, as well as workshops, that focus on efforts to create a more inclusive scientific culture for everyone.