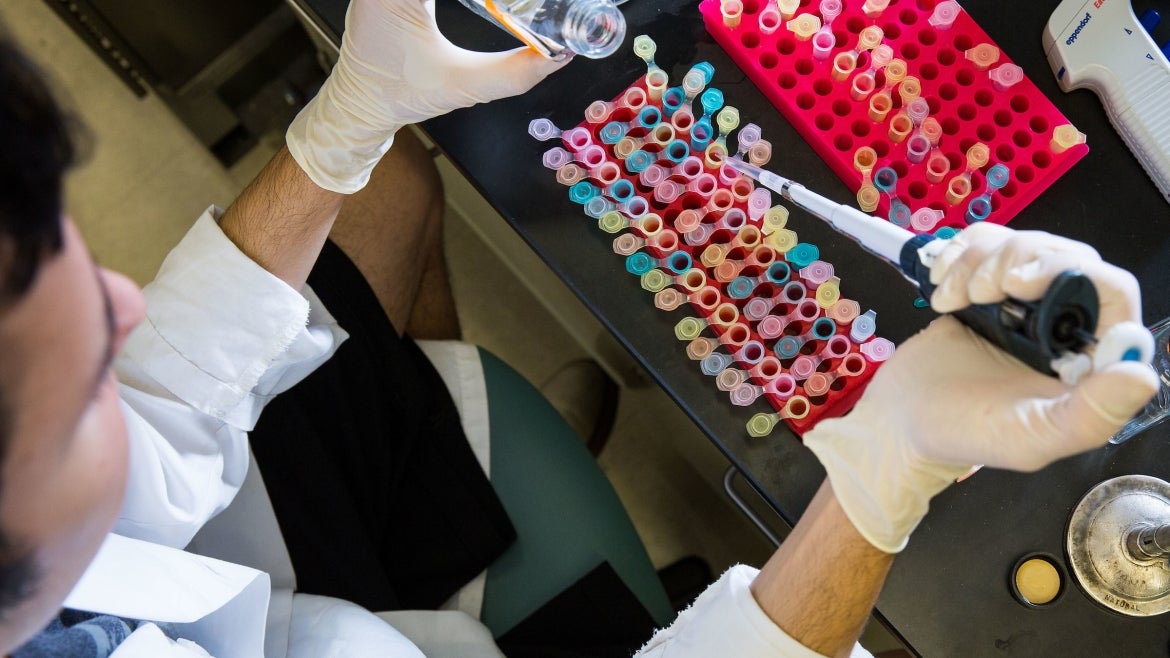 Editor’s note: This story is featured in the 2021 year in review. This story was updated on Dec. 8 to reflect an additional $50 million in external funding raised by OncoMyx.

Arizona State University just passed a milestone with more than $1 billion raised in external funding by the startups in its portfolio at Skysong Innovations, the entity that brings ASU research into the marketplace.

In addition, in fiscal year 2022 so far, industry partners acquired some of those startups for around $125 million in combined transaction value.

Inventions shepherded from lab to market include mechanical trees that pull carbon dioxide from the air and capture it for downstream use in construction, agriculture and industry; an engineered virus that attacks cancer cells; and an enzyme-based solution that cost-effectively reduces dust emissions at construction sites.

“A billion dollars of investments is an incredible milestone that signals enormous accomplishment, but the real significance is in what the investment has enabled,” ASU President Michael Crow said.

“We’ve built a water-capture company. We have nanomanufacturing companies. We have new materials. We have spinout companies in biotech. We have hundreds of technologies that we’ve spun out, and investors have invested a billion dollars to launch those companies and get them moving. It is the impact of what has been done with the money invested that is truly exciting.”

Built into ASU’s charter is the directive to advance “research and discovery of public value.” Since 2002, ASU research expenditures have grown more than fivefold, going from $123 million to nearly $640 million in fiscal year 2019, as federal agencies — including NASA, the National Science Foundation, Health and Human Services, the Department of Energy, and the Department of Defense — have invested substantial research dollars in ASU, along with investment from businesses, nonprofits and philanthropic sources, as well as state and local grants.

It has led to ASU ranking sixth out of 759 universities in the nation for total research expenditures among universities without a medical school in the most recent Higher Education Research and Development (HERD) rankings from the National Science Foundation.

ASU research aiming to solve some of society’s most pressing problems spans health, space exploration, engineering, climate change, cybersecurity and much more — but it’s not enough for the knowledge gained to live in a lab. It has to get out into the world and provide real solutions to real-world challenges.

That’s where Skysong Innovations comes in.

Skysong Innovations was established in 2003. To date it has launched over 160 startups, which between 2016 and 2020 in Arizona alone have generated $700 million in gross state product, $450 million in cumulative labor income and $60 million in state and local tax revenues. An independent economic analysis projects that by 2025, the economic impact of Skysong Innovations and its startup activities in Arizona alone will be more than $1.5 billion while the nationwide economic impact will exceed $2.3 billion.

“We focus on deal flow and economic impact for Arizona and for the world,” CEO Augustine Cheng said. “It’s about moving university technologies into the marketplace and real-world impact in terms of products and services benefiting people and job creation in terms of startups.”

Here’s how technology transfer works: Someone at the university — could be a faculty member, researcher or a bright graduate student — comes up with an invention like a process or a machine that has great potential if it goes to market. They go to Skysong Innovations for its expertise in managing this process.

Skysong Innovations undertakes a variety of activities to support the invention. The team there conducts market and legal assessments of the inventions, devises and executes strategies to protect intellectual property, markets the technologies to industry entities and completes the deals that help create new companies whose products benefit society. 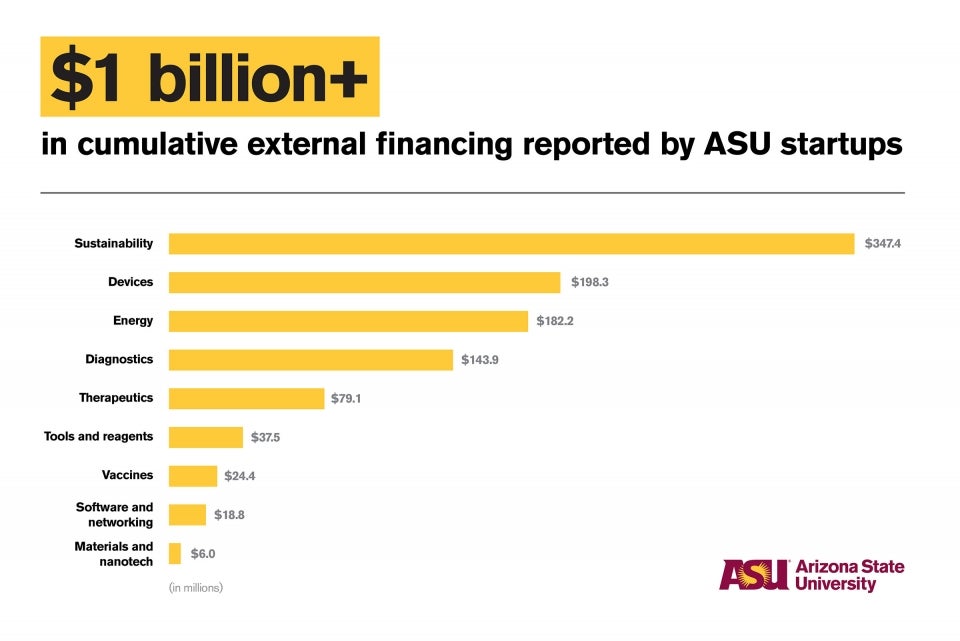 This function exists at all major research universities. Google was born at Stanford. Gatorade came out of the University of Florida. COVID-19 vaccines from Pfizer and Moderna originated from research at the University of Pennsylvania.

ASU does well compared to its peers, ranking fourth in launching startups among U.S. universities without a medical school, according to the Association of University Technology Managers, the national trade association for university technology transfer.

ASU was one of five universities without a medical school ranking in the top 10 for issued patents, startups launched, inventions disclosed and deal flow (along with Carnegie Mellon, MIT, North Carolina State and Purdue). According to the National Academy of Inventors, ASU is also ranked in the top 10 among universities nationwide when it comes to securing U.S. patents. Patents are a critical asset when companies try to raise external funding and secure a competitive advantage in the market.

“The upside for the university is that it can be a source of company formation and help launch new products, both of which benefit society and contribute to the economy,” Cheng said.

“Conventionally, research results are disseminated through publications and academic collaborations. Technology transfer is the commercial pathway for university research, which is largely funded by the federal government and internally funded by the state of Arizona. Historically, entire industries have come out of university research, and it is one way the U.S. competes globally. With nearly $640 million in research expenditures, ASU has tremendous potential for impact, and investors agree.”

One example of such an innovation is when virologist Grant McFadden, School of Life Sciences professor and director of ASU’s Biodesign Center for Immunotherapy, Vaccines and Virotherapy, created an engineered virus that attacks cancer cells. OncoMyx Therapeutics, headquartered in downtown Phoenix, is the company built around the treatment. Following a $25 million equity investment in 2019 — the largest amount of Series A funding raised by any ASU spinout — OncoMyx announced in December 2021 another $50 million of investment raised through its Series B financing.

“With this latest financing, we plan to advance our lead multi-armed myxoma immunotherapy into clinical trials to demonstrate initial safety and efficacy of intravenous dosing,” said Steve Potts, co-founder and CEO of OncoMyx. "Arizona State University and Skysong Innovations have been great partners throughout this growth."

Sally C. Morton, executive vice president of Knowledge Enterprise at ASU, said, “These investments are a potent demonstration of trust in ASU’s research quality and its ability to help solve complex problems. They are also a welcome affirmation that these impactful ideas are getting to the communities that need them most.”

The physical archive of over 60 years of observations of wild chimpanzees in Gombe National Park, initiated by Jane Goodall — founder of the Jane Goodall Institute and U.N. messenger of peace — and comprising hundreds of thousands of handwritten notes by hundreds of researchers, will find a new home at Arizona State University’s newest, state-of-the-art research building, Interdisciplinary...

The physical archive of over 60 years of observations of wild chimpanzees in Gombe National Park, initiated by Jane Goodall — founder of the Jane Goodall Institute and U.N. messenger of peace — and comprising hundreds of thousands of handwritten notes by hundreds of researchers, will find a new home at Arizona State University’s newest, state-of-the-art research building, Interdisciplinary Science and Technology Building 7 (ISTB7).

The archive — the Jane Goodall Institute Gombe Research Archive — will be overseen by primatologist Ian Gilby, Institute of Human Origins research scientist and associate professor with the School of Human Evolution and Social Change. 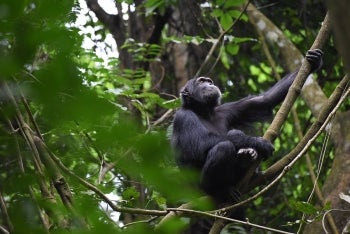 By the late 1960s, a remote outpost in Tanzania was bustling with field assistants and students studying wild chimpanzees in Gombe National Park. This research, begun by renowned ethologist and conservationist Jane Goodall, transformed our understanding of our closest living relatives and, in turn, our own place in the world. Her early observations of chimpanzee tool use, hunting and complex social relationships revolutionized the field of primatology. Since that time, a dedicated team has collected daily handwritten data on chimpanzee life — grouping, feeding and ranging — on check sheets, as well as longhand narrative observations of behavior, including grooming, tool use, dominance and mating.

In the early 1990s, a massive effort to organize, protect and analyze data from this priceless archive was spearheaded by Gombe researcher Anne Pusey. The data was organized into a powerful relational database that has resulted in many exciting and important discoveries that build upon Goodall’s early findings and continue to be essential to a long-term understanding of chimpanzees. Gilby is the director of the Gombe Chimpanzee Database, the digital repository of the physical archive.

Following the recent retirement of Pusey, the Jane Goodall Institute forged a new partnership with the Institute of Human Origins at ASU, where the archive and database will be curated by Gilby, a 20-year researcher at Gombe, who was a graduate student of Pusey’s. Because of its scientific and historical value, this priceless resource must be properly protected and preserved, while also remaining accessible to scientists.

“This is a dream come true,” Gilby said. “I have spent my whole career working with this amazing dataset, and I am humbled to be involved with its future, which promises many more exciting discoveries about our closest living relatives. I am particularly excited to make the data and our findings more accessible to a global audience.”

Lilian Pintea, Jane Goodall Institute vice president of conservation science, said, “We are excited to expand our collaboration with Ian Gilby and the new partnership with IHO at ASU to help us leverage Gombe long-term data as a global asset for interdisciplinary scientific research and conservation.”

Building on the Institute of Human Origin's expertise in primatology with chimpanzee researcher Kevin Langergraber at Kibale National Park in Uganda, and Regents Professor Joan Silk’s field research studying baboons in Kenya, the relocation of the collection establishes ASU and the institute as a global hub of noninvasive research on wild primates.

The priceless Gombe Research Archive deserves world-class storage. For the continued protection of these materials, an ASU Pitchfunder campaign has been started to upgrade the storage to fire- and water-proof filing cabinets fitted with acid-free, archival-quality folders. To become a supporter of the Jane Goodall Institute Gombe Research Archive fund, donate here.