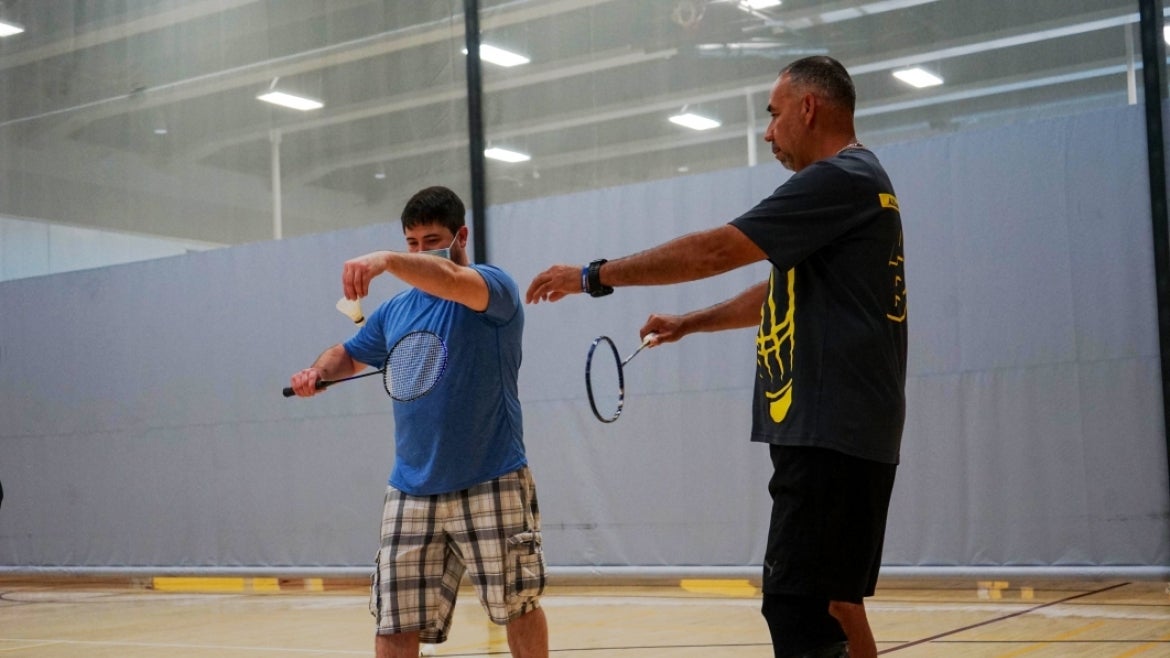 Traditional therapy doesn’t often include basketball or badminton. But for several veterans at the Phoenix VA medical center, meeting twice a week at Arizona State University to shoot hoops and hit shuttlecocks has helped them feel better physically and mentally.

Faculty members at ASU’s School of Community Resources and Development collaborated with the Carl T. Hayden Veterans Administration Medical Center to bring the students from the school and veterans together.

The students are enrolled in PRM 384, a recreational therapy practicum course, which is a requirement for earning a bachelor’s degree in recreational therapy. Their practicum involved hosting adaptive sports clinics for veterans at the Sun Devil Fitness Complex on the Downtown Phoenix campus.

Increased COVID-19 hospitalizations during the fall 2021 semester left less space for recreational therapy clinics in the Carl T. Hayden center, so two of the VA clinics were relocated to the fitness complex, where there was more room.

“The aim is to give students a wide variety of exposure to diverse service settings and populations,” said Clinical Associate Professor Kelly Ramella, who teaches the course. Groups of three to four students are paired with a specific community partner, such as the VA medical center, with which they will work during the semester.

VA lead recreational therapists Josh Parks and Michelle May have been helping the students conduct the clinics.

“For the VA to partner with the university, it’s just been a phenomenal experience,” May said. “We’re able to use sports as an outlet to help (veterans) heal either physically or mentally, so it’s just an amazing program.”

For the first half of the semester, students worked with Parks and May to host a wheelchair basketball clinic on Tuesdays and a badminton clinic on Thursdays. 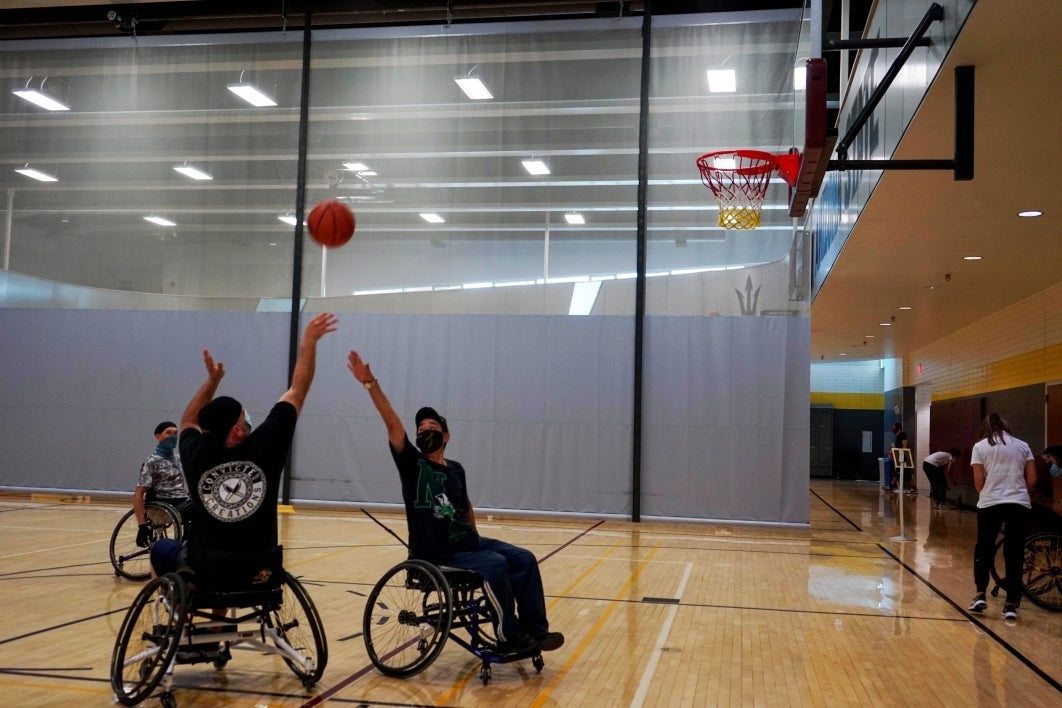 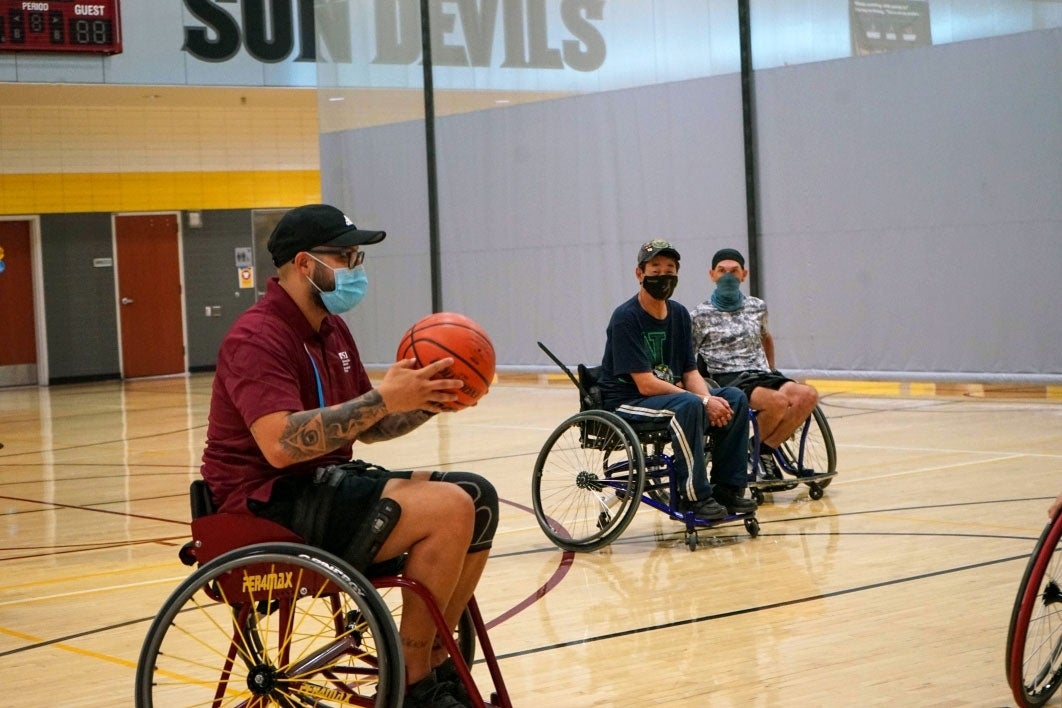 The wheelchair basketball clinics were held on Tuesdays for the first part of the fall semester. 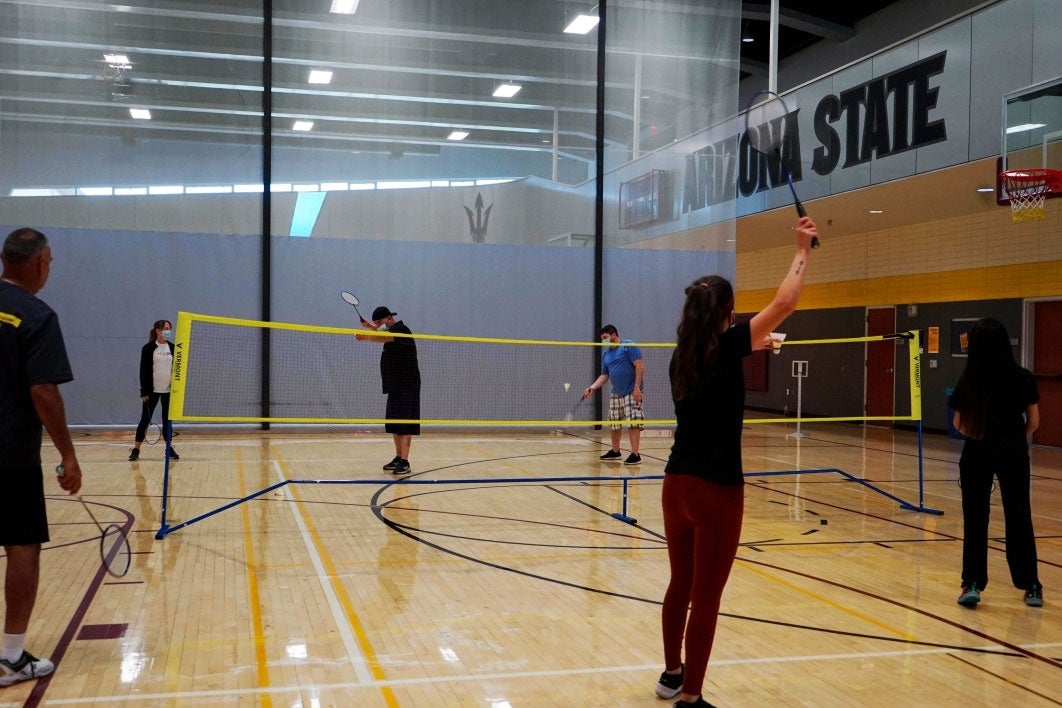 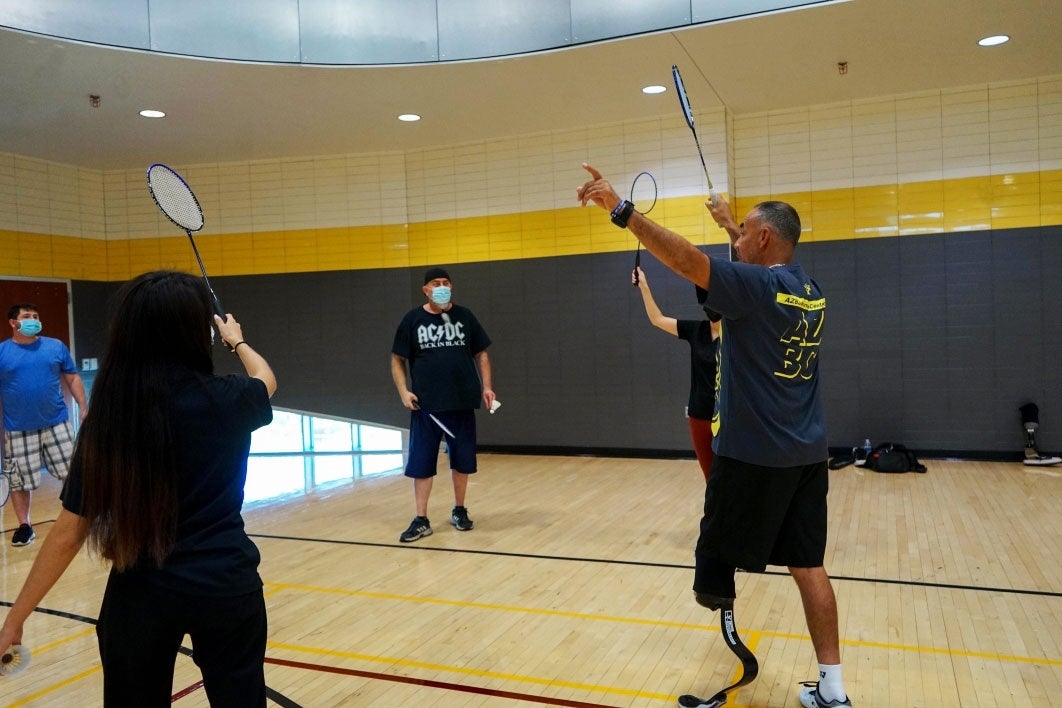 Richard G. Alcaraz (right), veteran and manager of the Arizona Badminton Center, volunteered to teach the veterans how to play badminton every Thursday.

Rick Alvarado, a parks and recreation major with a focus in therapeutic recreation, is taking the course for elective credit.

“My favorite part is just helping the veterans because I’m a veteran myself,” he said. “I just like to give back and see the progress of the veterans and cheer them up because I know how tough it gets sometimes.”

The clinics give the veterans an opportunity to connect while they work out.

Stephen Bradford is a veteran who attended both clinics and runs a music program for fellow veterans.

“We have to do things in combat that human beings should never do,” he said. “When I interact with other veterans that have been there and know what I’m talking about … (I know) I’m not alone.”

Richard G. Alcaraz, veteran and manager of the Arizona Badminton Center, volunteered to teach the veterans how to play badminton every Thursday.

“There are a couple things that have really changed my life,” he said. “One of them is adaptive sports.”

Alcaraz discovered adaptive sports through the VA after his leg was amputated.

“When I first became an amputee, I had good clinics with (the VA),” he said. “They’ve helped me out a lot … so in return I advocate for them. I’ll do any kind of clinic I can.”

Next semester, ASU will continue offering adaptive sports clinics with the veterans. The school also is exploring a partnership with First Place, a residential transition program for adults with autism, to offer similar experiences for ASU students.

Top photo: A veteran learns how to serve the shuttlecock during a badminton game as part of ASU's recreational therapy practicum course where the School of Community Resources and Development collaborated with the Carl T. Hayden Veterans Administration Medical Center to provide adaptive sports clinics for veterans at the Sun Devil Fitness Complex on the Downtown Phoenix campus. Photo by Amber Victoria Singer

Get earthquake-ready on International ShakeOut Day

Thursday, Oct. 21, is International ShakeOut Day, an annual event where millions of people worldwide practice how to be safer during earthquakes, update their emergency plans and supplies, and secure their space to prevent damage and injuries.ShakeOut began in California in 2008 as a drill to help educate the public in earthquake preparedness. Since then, ShakeOut has expanded across the globe wi...

ASU recognized for its care for the environment

Tempe campus , Off campus , School of International Letters and Cultures , The College of Liberal Arts and Sciences

Get earthquake-ready on International ShakeOut Day

Thursday, Oct. 21, is International ShakeOut Day, an annual event where millions of people worldwide practice how to be safer during earthquakes, update their emergency plans and supplies, and secure their space to prevent damage and injuries.

ShakeOut began in California in 2008 as a drill to help educate the public in earthquake preparedness. Since then, ShakeOut has expanded across the globe with over 18.7 million participants. 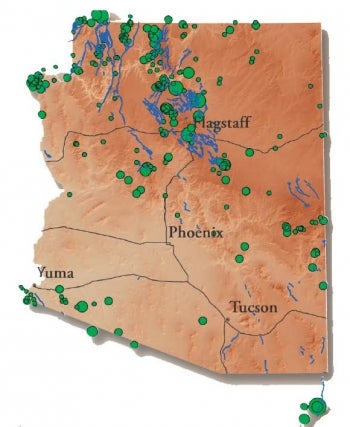 Each year Arizona experiences hundreds of earthquakes, but they are not always felt. The image indicates historical earthquakes with a magnitude of 3.0 or higher that were felt within the state of Arizona. Image by Arizona Geological Survey Download Full Image

And although California is more commonly known for earthquakes, Arizona does have earthquakes that have caused damage and injured people, so experts recommend everyone to be prepared.

“Arizona is adjacent to the San Andreas Fault system of California and some of the hazard comes from earthquakes in that system, and some of the faults cross into Arizona in the southwest near Yuma,” says ASU School of Earth and Space Exploration geology Professor Ramon Arrowsmith, who is the chair of the Arizona Council on Earthquake Safety.

ShakeOut earthquake drills can be scheduled at any time and anywhere and can be held in homes, offices or schools. And anyone can participate in a ShakeOut drill, which can include practicing protective actions like “drop, cover and hold on,” using various communication tools, preparing a disaster supply kit, and figuring out what to do when the power goes out.

“Being aware and mentally prepared is the first step to minimizing injuries,” says Jeri Young Ben-Horin, who holds a doctorate in geological sciences from ASU and who is a research scientist with the Arizona Geological Survey, where she catalogs the state’s earthquakes and maps active fault zones.

To commemorate International ShakeOut Day, Arrowsmith will be a guest speaker at the School of Earth and Space Exploration’s Virtual Night Sky event on Oct. 20, where he will discuss Arizona’s geology, seismic history and earthquake hazards. This event is free and open to the public.

Those interested in learning more about earthquakes in Arizona can visit the Center for Natural Hazards at the Arizona Geological Survey, which documents and monitors geologic hazards and serves as a resource of geological maps, reports, publications and data of natural disasters in Arizona.

In addition, there is a seismometer located in the basement of the Bateman Physical Sciences Building F-Wing on the Tempe campus that is managed by ASU geophysicists John West and Edward Garnero, also of the School of Earth and Space Exploration. Their corresponding website, earthquake.asu.edu, provides information on earthquakes and seismic activity from anywhere in the world, including magnitude, latitude, longitude and depth, and then calculates the distance of the earthquake from ASU. 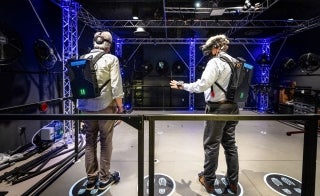 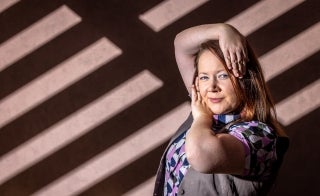 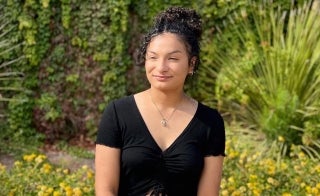 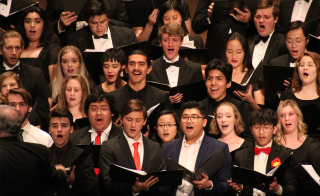 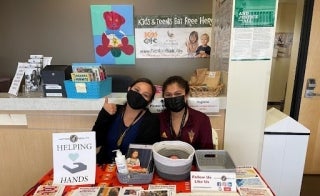 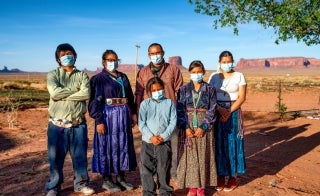