Women's Golf in Second at Stanford Sun Devil Women's Golf off to a strong start at the Stanford Intercollegiate.

Gordon Hawkins, internationally acclaimed baritone and professor of voice in the ASU School of Music, Dance and Theatre, performed the role of "The Reverend" in Tazewell Thompson's powerful new opera, “Blue,” with the Michigan Opera Theatre, Sept. 11–12 at Detroit’s outdoor Aretha Franklin Amphitheatre.

“The performances at Michigan Opera Theatre represent a commitment to bringing musical dramatic theater back to the public, while simultaneously addressing the pervasive issue of excessive policing in urban communities throughout the United States,” Hawkins said. 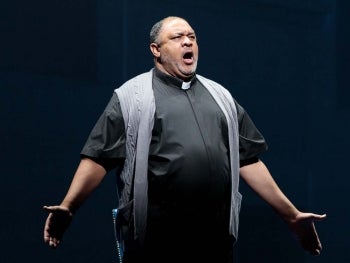 Gordon Hawkins performing the role of The Reverend in "Blue." Download Full Image

Winner of the 2020 Music Critics Association of North America Award for Best New Opera, “Blue” is a new American opera that tells the story of an African American family with a father who is a Black New York City police officer whose son is shot and killed by a fellow white officer.

The award, given annually by an awards committee of distinguished music critics, is a major recognition honoring an opera premiered in either the United States or Canada, and is the only award in the U.S. and one of the few in the world that simultaneously recognizes both composer and librettist.

Hawkins debuted the role of The Reverend, a Roman Catholic priest, in the world premiere of the opera at the renowned Glimmerglass Festival in Cooperstown, New York, in July 2019.

He was also scheduled to sing the role at the Kennedy Center with the Washington National Opera in early March 2020, but the production was canceled due to COVID-19. Additional canceled performances due to the pandemic included Lyric Opera of Chicago in June and Lincoln Center's Mostly Mozart Festival in July 2020.

The creation of “Blue,” a nickname given to police officers, began in 2015 after a series of incidents across America in which several young Black men had been shot by white police officers. After a series of conversations between artists and friends of Hawkins' at the Glimmerglass Festival, the idea of an opera on the subject was discussed and the ensuing piece was then workshopped for a few years.

Francesca Zambello, general director of the Glimmerglass Festival, contacted Hawkins in early 2019 and asked him to perform the role of The Reverend.

“Blue” tells the "behind-the-headlines" story and explores in detail the issue of grief associated with such a tragedy.

Although there are obvious racial overtones implied in the piece, Hawkins said the storyline does not focus on racial conflict per se. Though such incidents are often reported in headlines, the impact inflicted on the immediate family and community are seldom reported.

“This piece cannot be held down, and I know that once people get the opportunity to see this work in person, they will be forever changed,” Hawkins said.

Hawkins is considered a leading Alberich in the opera world, and his signature roles of Tosca’s Scarpia  and Rigoletto in the opera of the same name have brought him to some of the most esteemed companies and symphonies at both national and international levels. He has appeared with the Washington National Opera, the BBC Orchestra at Royal Albert Hall in London, Deutsche Oper Berlin and Teatro Maestranza in Seville, Spain.

Recently, he has performed the role of The Warden in “Dead Man Walking” with Lyric Opera of Chicago, the role of Amonasro in “Aïda” with Washington National Opera and Seattle Opera, and Scarpia in “Tosca” with Arizona Opera, Lyric Opera Kansas City and Cincinnati Opera. In concert, he has sung Mahler’s “Lieder eines fahrenden Gesellen” and Daniel Bernard Roumain’s “Harvest” with the ASU Symphony Orchestra.

Hawkins has shared the operatic and concert stage with such distinguished artists as Placido Domingo, Mirella Freni and Luciano Pavarotti. Throughout the world, he is associated with a broad range of dramatic roles and characters of the German, Italian and American operatic repertoire.

He is an American Institute of Musical Studies alumnus (1983), a George London Grant recipient, past winner of the Metropolitan Opera National Council Auditions and the Luciano Pavarotti Competition, and a former artist-in-residence at AIMS Graz. Hawkins has also served on the opera advisory review panel for the National Endowment of the Arts and was honored as a Washington National Opera “Artist of the Year.”

Hawkins will be re-creating his signature role of Scarpia this fall at Portland Opera.

“As I have gotten older, my advice to students pursuing a career in opera has changed through the years,” Hawkins said. “It is important for a singer to understand what their strengths and weaknesses are, and then work diligently each day to improve upon them. The biggest lie singers tell themselves is that there is nothing further for me to work on. There is always more to do.”