Working 'in' history: ASU graduate student makes a career change to work in her field

It’s never too late to follow your dreams. This is something people are told all the time, but it is especially true for Arizona State University graduate history student Amy Evenson.

Evenson always loved history and was fascinated by the stories her family members would tell her about the past. “Having grown up with my great-grandmother’s stories of working as a cook in a logging camp and my grandfather having to take a horse-drawn sleigh to school in the winter because of how remote their house was to town made history very tangible and approachable for me,” Evenson said. “History was about exciting stories, not dusty old books.”

She attended the University of Wisconsin-Stevens Point and majored in history and mass communication for her undergraduate degrees. After graduating, she applied and was accepted into Arizona State University’s PhD program for history, but didn’t end up going.

“I was offered what I thought to be a dream job as a corporate photographer for a Fortune 500 company, so I put my history aspirations on hold,” Evenson said.

Eighteen years later, she was laid off from her marketing job due to the coronavirus pandemic and realized she wanted to pursue history as a career. She found that ASU was still a good fit for her, so she enrolled as an online master’s degree student.

“When I finished my undergrad, I was so excited to be admitted to ASU’s history department and often thought about what my life would have looked like if I had pursued graduate school at that point,” Evenson said. “But life happened and priorities changed, but I still really missed studying history and regretted not pursuing my dreams. ASU’s online program offered me an opportunity to finally study history and also change the course of my career.”

Evenson learned how to hone her skills in critical analysis, which gave her the ability to put specific events into a broader historical context.

“It has also taught me how to read ‘against the grain’ of a specific record to identify gaps in the historical narrative,” Evenson said. “From a community outreach position, my work at ASU has helped me to find ways to make history accessible and relevant to a large audience.”

She started two new jobs during the first year of the history program: one as a marketing representative for the city of Austin, Texas, in the division of museums and cultural centers and another as an archive assistant for the Archives of the Episcopal Church.

“The biggest thing that led me to finding jobs in the historical field was having a good network of personal and professional contacts who knew that I was trying to change careers,” Evenson said. “Both positions came from acquaintances casually mentioning that they knew of a place that was hiring.”

For the city of Austin, she works with the museum sites on website design, social media campaigns, community outreach and engagement, and developing programs and research plans to reinterpret and recontextualize the site’s history to be more inclusive of underrepresented historical narratives.

Her job in the archives is to maintain a collection of parish histories, publications, personal papers and one of the largest prayer book collections in the U.S. She also helps with cataloging collections, identifying and researching items that are in need of appraisal or conservation and researching topic inquiries from the public.

“Both jobs challenge me in different ways and give me opportunities to apply my historical knowledge to my work,” Evenson said. “I actually enjoy going to work every day and look forward to the programs and projects we have coming up in the future at both jobs.”

Matthew Casey-Pariseault, clinical assistant professor of history and associate director of online programs for the School of Historical, Philosophical and Religious Studies, was thrilled and not at all surprised when he learned of Evenson’s jobs.

“Amy is a gifted researcher, writer and thinker,” Casey-Pariseault said. “Her work in my Latin American history seminars has been truly inspiring.”

She says that networking within her field of interest was one big takeaway she has gotten from her time in the program and encourages other students to do the same.

“While it is really easy to hyperfocus on your own research, your network of contacts and colleagues is what’s going to give you mobility in the profession itself,” Evenson said. “Join professional organizations and social media groups that specialize in your areas of interest and research.”

Evenson prioritized scheduling in study and writing time into her busy days. She usually works between 50 and 55 hours a week at her jobs, then attends school on top of that. But she always makes sure to find time to relax on Saturday mornings.

“I never thought I’d have the positions that I do, or that I would be ‘doing history’ professionally,” Evenson said. “It’s really cool that after a very long hiatus, I am finally studying history at ASU.”

She is on track to graduate with her master’s degree in history in spring 2022.

A team of faculty members and students in the Ira A. Fulton Schools of Engineering at Arizona State University contributed to a major geotechnical engineering field research project recently recognized with a 2021 Western States Seismic Policy Council Award in Excellence.Associate Professor Leon van Paassen led the group from ASU’s Center for Bio-mediated and Bio-inspired Geotechnics, in a...

Hispanic and Latino social work faculty and alumni reflect on their heritage, work

A team of faculty members and students in the Ira A. Fulton Schools of Engineering at Arizona State University contributed to a major geotechnical engineering field research project recently recognized with a 2021 Western States Seismic Policy Council Award in Excellence.

Associate Professor Leon van Paassen led the group from ASU’s Center for Bio-mediated and Bio-inspired Geotechnics, in a collaboration with researchers from Portland State University and the University of Texas at Austin. The endeavor has been funded by the Natural Hazard Engineering Research Infrastructure program of the National Science Foundation. 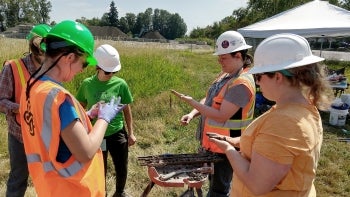 Van Paassen and Professor Edward Kavazanjian, director of the Center for Bio-mediated and Bio-inspired Geotechnics, have collaborated on projects to reduce the impact of earthquakes on soils. One of these aftereffects is liquefication, or the process by which soil saturated with water loses strength, which can lead to ground failure.

The work has included treating two test sections located within the Port of Portland Critical Energy Infrastructure hub (the Harborton site) and adjacent to Portland International Airport (the Sunderland site). 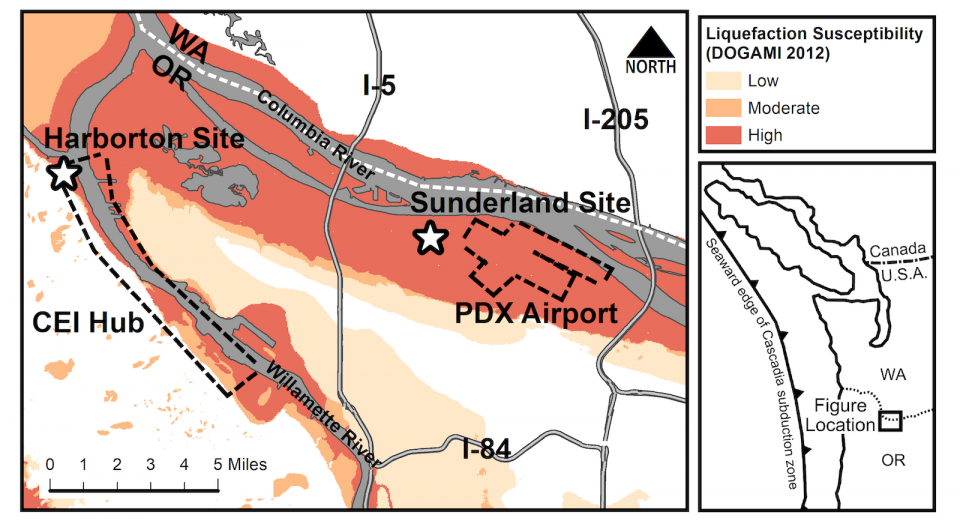 The map shows two sites in the vicinity of Portland International Airport and the Port of Portland Critical Energy Infrastructure hub that are test sections for the research to develop techniques for reducing soil damage as a result of earthquakes. Map courtesy of Portland State University

There, researchers monitored the treatment performance and the level of desaturation through a variety of methods and shook the ground at one test section using the NHERI@UTexas T-Rex mobile shaker system.

“The MID technique is particularly noteworthy because it can be used to address two problems that have vexed earthquake engineers for decades,” said Kavazanjian, who is a Regents Professor at ASU and the Ira A. Fulton Professor of Geotechnical Engineering.

“Due to its nondisruptive nature, it can be used to remediate existing infrastructure at risk from liquefaction. And the success in achieving desaturation at the two test sites indicates the potential for remediating the silty soils common to the Portland area that are not amenable to conventional liquefaction mitigation techniques,” he said.

The Center for Bio-mediated and Bio-inspired Geotechnics team provided technical and logistical support to the Portland State University team that led the overall project. The center's support also included advising on the layout of the installation for the two test sections, developing the treatment solution and treatment regimen, installing downhole sensors for soil moisture content and salinity, and data interpretation.

The project also included a half-day workshop in Portland at which more than 50 engineers and government agency officials were introduced to the MID technique and briefed by ASU, PSU and UTexas team members on work at the two test sections.

Preliminary results will be reported in a paper to be presented at the next American Society of Civil Engineers Lifelines Conference, which will commemorate the 50th anniversary of the historic 1971 Sylmar (San Fernando) earthquake in Southern California.

Monitoring and data analysis continues while the project team seeks supplemental support from the NSF for additional work at the site near the Portland International Airport. Read more about the project and the award on Page 6 of the Summer 2021 WSSPC newsletter.

Van Paassen says the Portland project first emerged from CBBG’s successful 2018 pilot project in Toronto, where microbial processes were used to stabilize soils by inducing carbonate mineral precipitation. That effort was funded in part by support from NSF Rapid Response Research, or RAPID, grant for work being done by a CBBG industry partner Groundwater Technologies Inc. on rehabilitation of the Toronto waterfront.

The RAPID program was established by the NSF Engineering Directorate to take advantage of unique opportunities for research with a short time horizon. In the Toronto project, the RAPID grant was used to mobilize the big T-Rex shaker and its associated mobile soil laboratory, Kavazanjian says.

In the Portland project, the RAPID grant work took advantage of the availability of the T-Rex shaker in the Pacific Northwest. 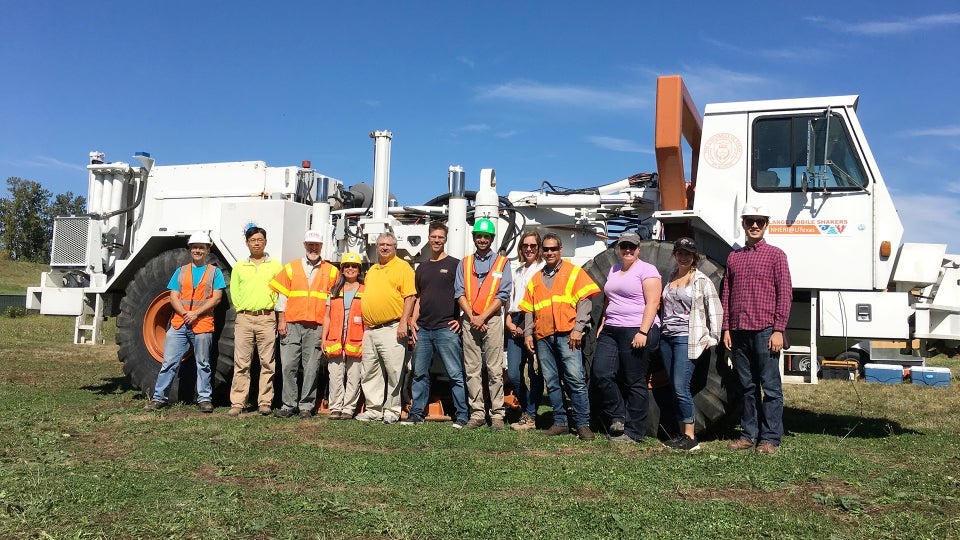 When Arash Khosravifar and Diane Moug, PSU assistant professors of civil and environmental engineering, became aware of the availability of T-Rex, they contacted Kavazanjian and then joined with van Paassen and other colleagues Kenneth Stokoe, a professor at the University of Texas and the principal investigator for the T-Rex project, and Yumei Wang, a former geohazards engineer for the Oregon Department of Geology and Mineral Industries and the current senior adviser on infrastructure resilience and risk with PSU. 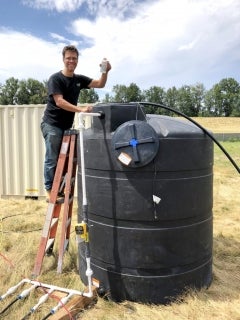 The group prepared a second RAPID project proposal focusing on microbially induced desaturation by bacteria, which is used to produce nitrogen gas for mitigation of liquefaction in the silty soil characteristic of the Portland area.

Preparations for the project began in spring 2019, including plans to use the T-Rex shaker again to evaluate whether the MID could work for mitigating earthquake induced liquefaction. The soil treatment was done later that year, followed by shaking of the ground with T-Rex and monitoring using the mobile soils laboratory equipment. Monitoring with sensors installed at the site has been ongoing since then.

“We plan for this to continue for the next several years because one of the big challenges is to demonstrate that the entrapped gas is persistent,” van Paassen said.

The team also hopes to return to the site with T-Rex after some modifications are made to the equipment, he said, because “it turned out that the shaking by the T-Rex was not strong enough to evaluate the performance of MID in the deeper soils.”

A current proposal to the NSF requests support to shake the site once again with T-Rex after making modifications to the equipment, demonstrating the ability of the desaturation technique to mitigate liquefaction and then continue monitoring for another five years “to find out how the entrapped gas is distributed in the soil, develop models to predict how the gas is distributed and how the soil responds,” van Paassen said. 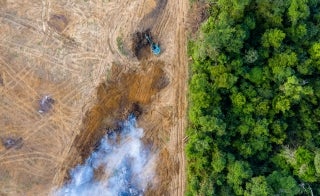 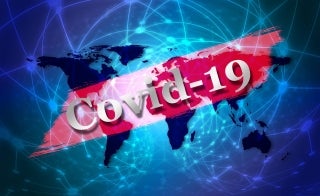 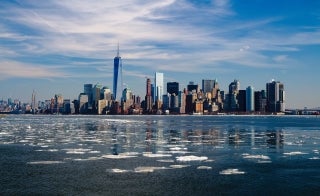 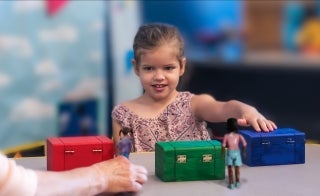 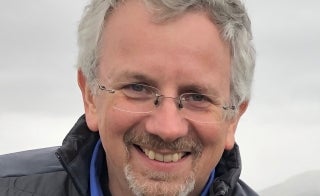 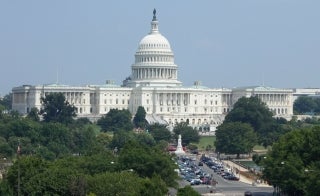